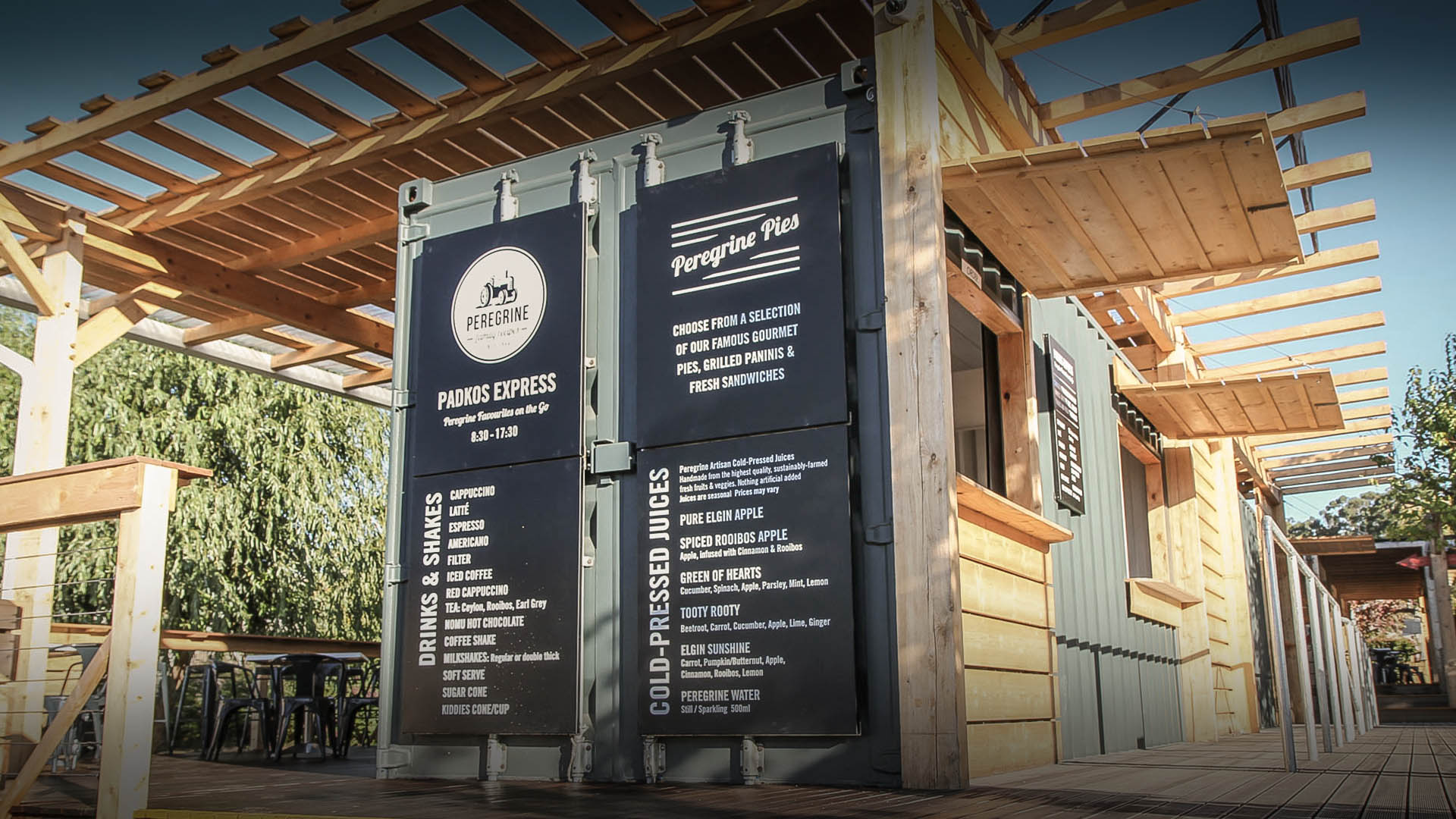 If you ever find yourself cruising through the Elgin Valley in South Africa, do yourself a favour and stop at Peregrine Farm Stall. Buy two or three venison pies. Trust me, if you only get one, you’re going to get 500 m down the road only to make a U-turn to buy more.
Besides producing the world’s best pie, Peregrine is also a stunning example of why inside the box innovation works in Africa.

I say inside the box, but the brief I received from owner Justin was anything but that. In fact, it’s probably the most outside the box project that’s come across my desk.

You see, Peregrine’s reputation as South Africa’s top rest-stop resulted in people not being able to … well … stop at all. The number of locals and tourists clambering to experience all the famous farm stall had to offer was causing so much congestion that travellers were starting to drive by instead of stop off.

After spending some time watching their customers flow (or rather not flow) in and out of the Peregrine space, the answer became clear.

Peregrine’s design at the time catered for one audience – those who wanted to sit down and linger in the aroma of cider, pie and the surrounding indigenous forest.

For those who had been there, done that and were simply returning to stock up on delicious eats and move on, there was no solution.

To design Peregrine’s traffic, we had to reinstate some of its core values as a farm stall, which by definition is a quick, simple pit stop. So, (un)naturally I looked for inspiration in an industry where the art of speed and convenience was turning billions in profit every day.

When Ray Kroc and the McDonald brothers were still working together in the 50s, they struggled to make McDonalds successful. Ray believed he was running a food business, until Harry Sonneborn convinced Kroc that the real money was in real estate. Sonneborn’s idea was to have the McDonald’s company lease a plot of land and the building for each restaurant. The company would then sublease to a franchisee who would run the restaurant. Sonneborn further developed the plan to eventually take out mortgages to own both the building and the land.
At first, McDonald’s charged franchisees markups of 20 per cent of lease costs, but this eventually increased to 40 per cent. The rest, as they say, is history.

This is why you always see McDonalds franchises on the most expensive corners in cities and towns.

But Peregrine couldn’t simply build a takeaway wing. Africa might be known for its wide-open spaces, but those spaces are expensive to own, and building permanent structures on them comes with its own set of challenges, such as terrain, costs and unskilled labour.

The solution had to allow pitstop traffic to flow freely and easily in and out of Peregrine, without the cost or hassle of building permanent structures, and it had to happen on a small piece of leased land. These very specific parameters created the walls of the box in which I had to think in order to deliver the desired result.
And it just so happens that the solution also came in a box. 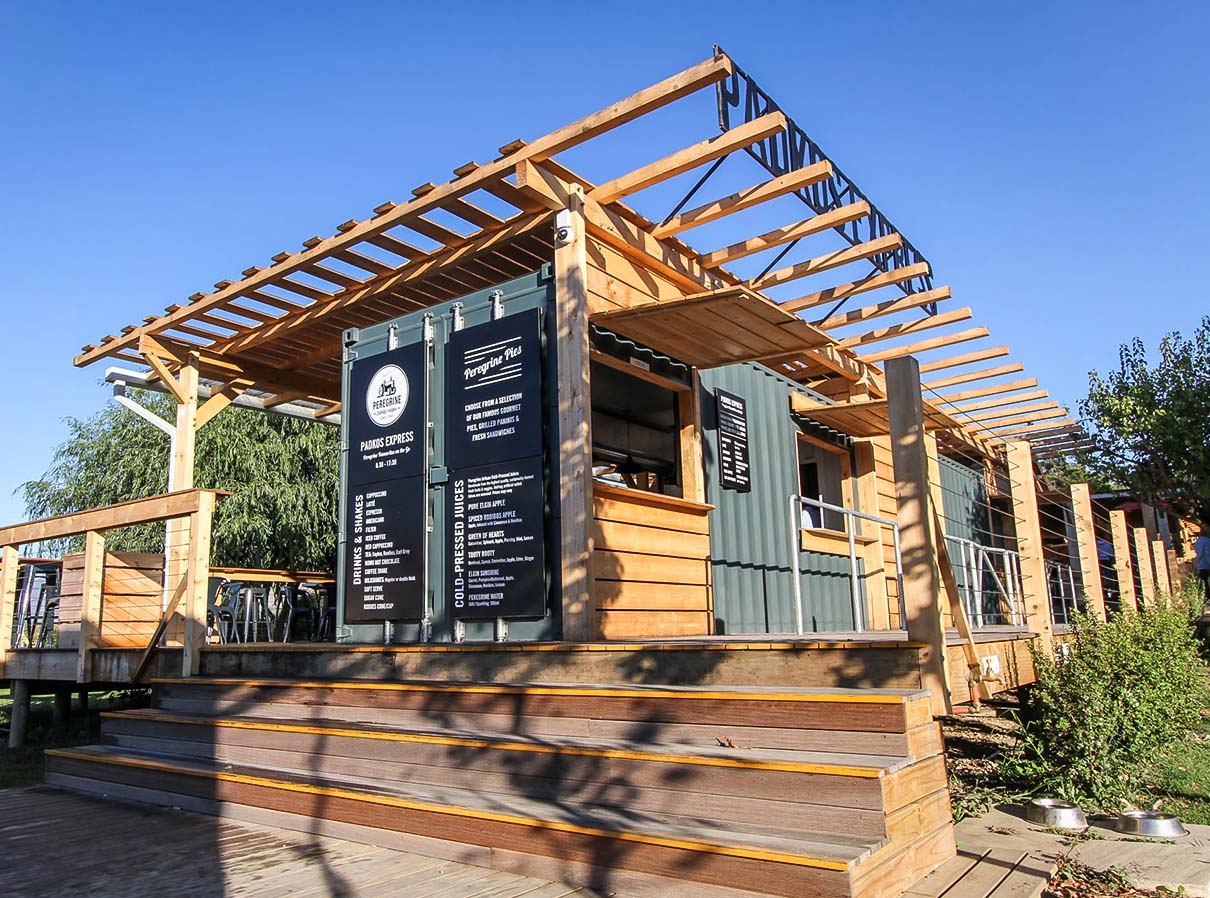 Padkos Express – on paper it’s a semi-permanent solution able to move to any region. It was designed and built in the same venue. It’s a low-cost investment that shows quick ROI. It creates jobs and encourages local entrepreneurship. But in reality, it’s good-to-go coffee, cider and baked goods now served to customers eager to tackle the scenic Sir Lowry’s Pass down to Cape Town. While travellers wait for their quick order, they can keep an eye on the kids enjoying the play area dotted with old tractors, swings and jungle gyms. Or they can explore the other container stores leased to local small business owners selling locally produced goods, such as clothing, fynbos honey and champagne style apple cider. The new addition allows Peregrine to cater to two different markets who travel through the business at different paces. Central to this was also the parking lot, which we optimised to encourage flow with as little as possible bottlenecking of traffic.

Peregrine Farm Stall had record-breaking sales in 2015 and 2016. The sale of baked goods has increased so much that they are now expanding their kitchen to meet the demand.

As for the traffic, well, why don’t you pull in for a pint of cider and see for yourself.

Innovation in Africa, whether it’s a product, space or concept, comes with a very specific set of challenges. You only have to find a partner that can think inside the box.